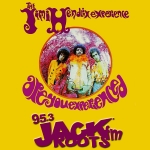 Today’s classic album is the debut from the Jimi Hendrix Experience, but let’s face it, as great as Noel Redding and Mitch Mitchell were, we’re really talking about Jimi here.  I learned quite a bit about Jimi while diving in to this album.  I didn’t realize ‘Hey Joe’ wasn’t an original!  Nope, it was a song by The Leaves!

One of the big points in this episode is the enormous output of posthumous releases from the Hendrix vaults and whether or not they’re any good, and can water down his career.  Be sure to check out the BONUS CONTENT that starts at 7:35!  A cheesy, 90s 1-hit-wonder is lifted directly from a track on this album, and the mashup is in bonus content.