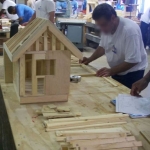 Even though former prison inmates are locked out of certain jobs, it’s possible for them to start over in other fields. Scott Eike is the Regional Career Coordinator with Home Builders Institute. He oversees a program that teaches inmates plumbing, carpentry, masonry, and electrical wiring skills. There’s a workshop at Sheridan Correctional Center.

Eike says just 5% of HBI’s participants return to prison, compared to 40% for the Illinois Department of Corrections as a whole. David Gomez, the warden at Sheridan, says Sheridan’s recidivism rate is just over 30%.

While many people simply say law breakers should be put away and punished, Gomez says that view doesn’t consider what happens when inmates are eventually let out. Each former inmate goes to live somewhere. He may be an asset or a liability to that community. Programs to help them adjust their attitudes and prepare for careers help them avoid returning to the lifestyle that led them to prison in the first place.

Sheridan Correctional Center and HBI presented an open house Thursday for invited visitors to see the workshop for themselves. During the next week, WCMY will present stories from inmates who participate in HBI and also from a former inmate who’s staying involved and returned for the open house.