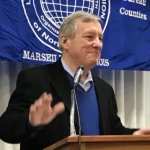 Speaking at a labor summit in Ottawa Saturday, Durbin said Trump was in favor of major projects for roads, schools, and broadband expansions. And then he changed his mind early last year because of the investigations against him.

Durbin says he disagrees with Pres. Trump on a lot of things, but he’ll support an infrastructure program.