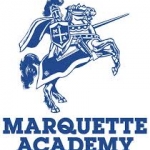 Fanti tallied an 11-0 record with 93 strikeouts and a 0.55 ERA in 64 innings on the hill for the Crusaders. He allowed only five earned runs, 35 hits and five walks over 12 appearances.

At the plate, the recent Marquette graduate hit .357 with five doubles, two home runs and a team-best 37 RBIs.

Fanti was joined on the Class 1A list by Somonauk standout John Johnson. Brant Vanaman of Hall was named to the Class 2A All-State Team.