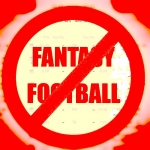 We’re getting to that time of year again…prepping your draft board.  Rearranging schedules to meet with your buddies to do a live draft even though you’ll all have your faces buried in laptops and phones anyway….yes, it’ll soon be draft season for Fantasy Football.

Well not me this year…no, I’m sitting this year out, and I have a sneaking suspicion a lot of others will too.  For the last 5 years, I’ve ate, slept and breathed fantasy football.  I like watching Football, or at least I used to.  The more invested I got into my fantasy leagues, the less I cared about watching and enjoying the games.  It was more about watching my fantasy players, meaning if my player or an opponent’s player was playing on a Thursday or Monday night, I would be tuning in and seeing how it would impact my game.  “Sorry Mrs. Shap.  Our binging of Orange is the new Black has to be put on hold so I can see if this backup TE from Houston that my opponent for some dumb reason picked up and is playing will find a way to screw me out of win tonight.”

Every weekend became an emotional nightmare.  If my team would lose because a holding penalty negated a 60 yard touchdown run, or my opponent wound up winning because of some ridiculous garbage time stats for a Jacksonville receiver it would make me mad for days, sometimes weeks!  I would live and die by my Fantasy Football team.

But NOT THIS YEAR.  I’m abandoning ship!  It’s not that I plan to stop watching football, but now I’ll be primarily watching the Bears and if there’s other games of interest…no more ulterior motives.  And I think what will happen is I’ll see that the NFL product has gone downhill.  The caliber of play isn’t what it used to be and it’s not worth the crazy investment of time I was giving to it every week.  Not just on watching the games, but researching players, matchups, schedules, etc.

On a recent Bold Statement segment, I predicted that less people will play Fantasy Football this year and the popularity of Fantasy Football will continue to fall over the new few seasons.  It’s possible I’m WAY off on this, but I’m not the only one who thinks so.  Bleacher Report CEO Dave Finocchio said that season long “NFL fantasy probably peaked three, four, five years ago. It’s slowly dwindling”  citing daily fantasy, and eventual legal sports betting leading to its demise.

So I’m getting out!  I’m not waiting for everyone else to leave and then climbing on the last train car to freedom!  Put me in the front of the locomotive.  But if you are still playing and have the #1 pick, don’t be a fool and let Le’Veon Bell slip through your fingers.