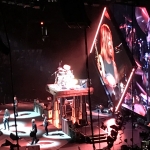 Earlier this week I made a last minute decision to go see the Foo Fighters at the State Farm Center (formerly Assembly Hall) at U of I.  Glad I went!  It’s been about a decade since the last time I’ve seen them, and they did not disappoint!  Several standout highlights from the show featuring long jammed out versions of many of their favorites.  Dave Grohl is one of the best frontmen in Rock…not for his voice, but for how he connects with the audience, and their ‘band intro’ section has turned into ‘what crazy cover are they going to play tonight?’  They started with a snippet of Van Halen’s ‘Jump,’ then ‘Another One Bite’s the Dust,’ even some Ramones!  But sandwich in the middle, was a full performance of ‘Tom Saywer’ by Rush, sang by someone in the crowd!  And this guy CRUSHED it too!

I googled the guy.  Turns out he’s the front man for a Champaign band, The Decadents, oh, and he’s a radio host for a sports station down in Champaign too.  I’m thinking the whole thing was probably planned, but it still doesn’t take away from how cool it was!  Here’s a good chunk of the performance…wish I would’ve recorded the whole thing since I missed Taylor’s Neil Pert impersonation!