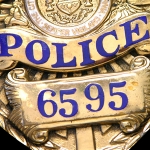 Seneca Police Chief Ray Meglan is retiring after 37 years on the job.

The Marseilles native worked at Libby-Owens-Ford Glass Company, but was laid off around 1980.

With no experience in law enforcement, Meglan found part-time work as a patrol-officer at the Seneca Police Department.

From there, he climbed the ranks and became Chief of Police seven years later.

The most rewarding part of the job for Meglan were programs that helped kids such as DARE, Shop with a Cop, and the Police Explorers Program.

He says domestic abuse calls were the worst to handle, especially when both parents had to be arrested. Meglan’s most memorable case, and one he plans to continue working in retirement, is that of Karen McGovern who went missing in 2010 and still hasn’t been found.

However, Meglan also plans to use his retirement to visit more with his grandchildren.