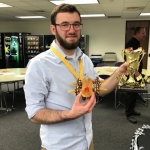 IVCC students majoring in engineering and education, plus racers from five local high schools, designed completely edible cars and put them to test with time trials. 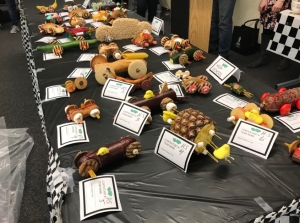 Computer-Aided Design professor Dorene Data says the contest started as a way to get more women involved in engineering.

High school students got involved after some Hall High School calculus students, taking a dual credit class with IVCC, took part in the contest. Other area high schools liked the idea and got on board as well.

Cars are judged for speed, creativity, and nutritional value among other things.

Elementary education major Jordan Timm helped build a car to race for a class project. She explained how doing so could someday be useful for teaching.

Jordan’s teammates, also studying education, Michelle Lakan and Alyssa White said it was a trial and error process to build their edible car, which is mostly made of hardened rice crispy treats and cookies.

The track, which features a spatula start gate, was also designed by IVCC students.