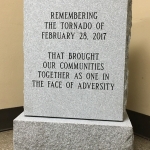 Long Term Relief Fund Chairperson Alexis Ferracuti says a recovery the experts said would take three or four years is on track to take just a year-and-a-half. So far, she has helped oversee $291,000 in spending from $301,000 in donations for Naplate-Ottawa tornado relief.

Ferracuti estimates it’ll take another $25,000 to finish recovery spending in about six months. Donations are still being accepted at www.srccf.org. Or call the Peter Ferracuti Law Firm at 815-434-3535

One moment of silence at the anniversary gathering in Naplate last night was for Rick. Another was for Wayne Tuntland and his son-in-law D.J. Johnson, who were killed when the tornado knocked over a tree on Ottawa’s south side. Dave Johnson, Sr. recalled it.

A monument commemorating the coming together of two communities will be placed soon on the Ottawa-Naplate boundary.