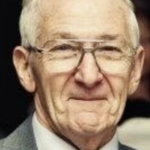 Funeral services will be held 2:00 p.m. Saturday, January 12th at Gladfelter-Roetker Funeral Home with Major Connie Shaw officiating. Interment will follow in Ottawa Avenue Cemetery. Visitation will be from Noon to 2:00 p.m. Saturday at the funeral home. Pallbearers will be Brandon, Chris and Kevin Simpson, Jr., Tom Govero, Jeff McDunnin and Rob Carson.

Lanis loved the Lord and loved reading and studying scripture. He dearly loved spending time with his family, leading Boy Scouts with his sons and attending sporting events with his grandchildren and great-grandchildren. Lanis received his electrician degree at IVCC while working at LOF where he worked until retirement. He was the owner of Simpson Towing until his second retirement.

Lanis has been a long time member of The Salvation Army in Ottawa. He served as the Corps Sergeant Major until his health declined. He was a Corps Council Member at the Salvation Army. He often led the church services including preaching to the congregation. Lanis also supervised the Salvation Army Kettle Program for many years. He was the recipient of the world-wide “Others Award” in the Salvation Army for all the work he did for others. Lanis enjoyed working with his hands. He built several homes, just to give back to the people he loved to serve. He didn’t sit much, but when he did, he had his Bible in hand or would listen to Gospel music. Lanis will be greatly missed by his family, friends and our community.

Memorial contributions may be directed to the Salvation Army.