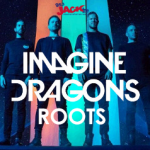 I try to keep an open mind about music and realize not everything out there is for me.  I guess Imagine Dragons fall into that category.  And that’s ok!  There’s over a BILLION views on our Roots song of the day on Youtube!  Yes, A BILLION!!  People LOVE this band!  I have good friends and family that love this band!  But after consuming their entire catalog in less than a week, I was begging for a live drum track.  Instead, their albums are full of the fake ‘snap/clap’ sound for the masses that’s all over current commercial radio (pop and ESPECIALLY Country).

So with that, I’m issuing an early apology for this week’s elitist, musical snob take on the Imagine Dragons.

Next week we’ll do Roots on the Purple Rain Soundtrack!