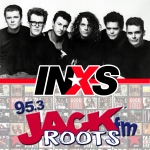 INXS was an interesting band to tackle with Roots.  As the albums progressed from the late 70s through the mid-80s, you could really hear them find their own distinct sound.  Their are some great new-wavy gems from their early catalog (Don’t Change), and then by the time 1985’s Listen Like Thieves came out, they were ready for worldwide stardom.  1987’s KICK put it altogether as they tried to make every song on it a smash single, 4 of which cracked the US top 10.

Something we didn’t discuss on this week’s episode, but is worth giving some thought, why didn’t INXS fit in with the 90s alt-boom?  U2, the Cure, Depeche Mode, they all thrived.  Sure, INXS is a bit more commercial, and a little lighter in overall sound.  But especially stateside, their popularity dipped.  And i’d be amiss if I didn’t bring up the 2000’s reality singing competition ROCKSTAR: INXS!  Unfortuantely, JD Fortune was no Michael Hutchence.