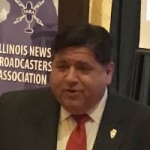 All the talk about about Gov. J.B. Pritzker’s proposed income tax changes is about the rates going up as someone’s income goes up. Pritzker says 97% of Illinoisans would pay the same or less.

Pritzker says the proposed rates are what they are because they accomplish his goal of raising more money and giving the middle class a break. He spoke at the Illinois News Broadcasters Association convention in Normal over the weekend.