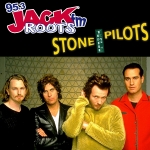 STP is one of those bands that were outstanding at writing and playing stuff that sounded noticeable like ‘haven’t I heard this before?’ but was original enough to make it their own.  They weren’t from Seattle, although they were often lumped in with their Grunge contemporaries, sometimes confused for, or considered rip-offs.

After their debut Core, they put the idea as a Pearl Jam knockoff to bed with the stellar Purple and Tiny Music….Songs from the Vatican Gift Shop.  But as this episode of roots will show, their influence is still very noticeable.  Be sure to listen to the end for BONUS CONTENT, not included in the broadcast!

Here they are with their new lead singer, Jeff Gutt.  He was originally discovered on the X-Factor.  He sounds and looks just like Scott.