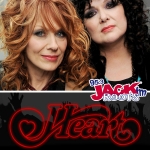 Heart is an interesting band to do a deep dive because they have a wonky history, and several iterations and sounds.  Technically, the Wilson sisters (Ann & Nancy) have been the only constant, but that’s not even true!  The band (in some variation of what would go on to be known as Heart) began in 1967.  Ann didn’t join until the early 70’s and Nancy in ’74.  Their debut album followed in ’75.  To say the band had a thing for Led Zeppelin would be an understatement.  There’s lots of examples of them being influenced by Zep (listen to the episode), although they never flat out stole from them.

Be sure to check out the bonus content starting at 9:18 for Robb and I discussing the 80s glossy production era of Heart and their return to rawk in the 2000s!

Heart will be at the Hollywood Casino Amphitheater July 11th with special guest, Sheryl Crow.  Tickets are still available!

Heart, like everyone else did the ‘unplugged’ treatment in the 90s.  They got a special assist from their hero John Paul Jones who produced and appeared on the CD release of this album.  Too bad Page and Plant didn’t include and invite him on their unplugged album and tour.

This is from their induction into the Rock Hall of Fame.  Nancy can still play, Ann can still belt with the best and it’s nice to see some of the original members get the recognition and having fun on stage.