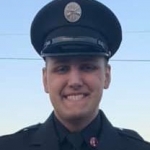 People who knew Oglesby fire fighter Evan Knoblauch admire him for his courage against cancer. The 20-year old went through fire fighter training, despite the pain the disease and treatments often put him in. Oglesby Fire Chief Ron Papurello posted on social media yesterday, his officers would often try to get him to take a break, but Knoblauch insisted on pushing ahead.