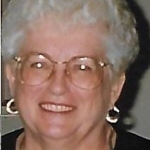 Burial will be held at a later date. Arrangements are through the Mueller Funeral Home in Ottawa.

She is survived by her husband, Myron, a son Jerry Mason, of Marseilles, a daughter Lynda (Bill Rose) Danielson, of Streator, 3 grandchildren, and 6 great grandchildren.

She was preceded in death by her parents, a brother Alan Morphew, and a sister Joyce Livermore.

Memorials may be directed to the Alzheimer’s Association.