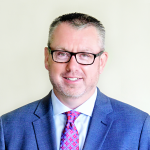 Peru attorney Brian Vescogni is running for LaSalle County State’s Attorney in 2020 as a democrat.

He has eighteen years of experience as a prosecutor in LaSalle County, but recently left the State’s Attorney’s Office.

Donnelly says her firing of Vescogni was not political. She says he was let go over lackluster performance. Donnelly hasn’t yet decided if she’ll run again.

If elected, his main focus will be combating the drug trade in the county. He’s a supporter of the drug court program that keeps people dealing with drug addiction out of jail and in treatment that Donnelly is trying to start.

Vescogni says he has a good relationship with law enforcement and wants to build on what’s already being done to combat drugs in the county.

Vescogni also says he’d also like to be accessible to the public if elected.