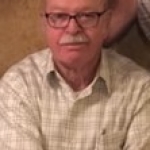 Myron Lee Mason, 89, of Marseilles, passed away on Monday morning, September 9, 2019 at Aperion Care in Marseilles.

Burial will be held at a later date. Arrangements are through the Mueller Funeral Home in Ottawa.

Myron was born on April 3, 1930 in Danway, IL to Harold and Wave (Larson) Mason. He was a graduate of Serena High School. Myron married Gloria Jean Morphew on September 10, 1951 at the Norway Methodist Church. He was a veteran of the US Army, where her served time in Germany. Myron was a life-long farmer. He was a member of Norway Methodist Church, National Farmers Association, and the Illinois Valley Trailriders.

He is survived by 2 children, Jerry Lee Mason, of Marseilles, and Lynda (Bill Rose) Danielson, of Streator, 3 grandchildren, and 6 great grandchildren.

He was preceded in death by his parents, his wife, on September 6, 2019, and 2 brothers, Harry and Keith Mason.

Memorials may be directed to the Alzheimer’s Association.