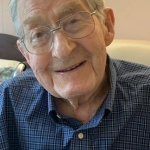 Melvin A. Hagenbuch, 95, of Waltham Township, passed away peacefully Monday afternoon, September 9, 2019 at Liberty Village, Peru. Funeral services are scheduled for 11 a.m. Saturday, September 28, at Waltham Presbyterian Church with Rev. Joel Stevenor, pastor, officiating. Burial will follow in the Waltham Cemetery. Visitation is planned from 9 to 10:45 a.m., at the church. Arrangements are through the Mueller Funeral Home in Ottawa
Mr. Hagenbuch was born on January 14, 1924, to Charles and Cora (Bartlett) Hagenbuch, in the Waltham home in which he lived almost his entire life. He married Ardelle Marie (Munson) on December 11, 1948, and they were married for 69 years before her death on July 11, 2018. A graduate of LaSalle Peru High School, Mr. Hagenbuch was a life-long farmer on his treasured 165-year old family farm. He was an able steward, always giving back more to the land than taken. Greatly respected throughout LaSalle County, and by friends and family, Mr. Hagenbuch was admired for his integrity, kindness and strength of spirit. In his retirement, he loved to garden and travel with his wife throughout all 50 states. He was a life-long member of the Waltham Presbyterian Church, serving in numerous capacities, and was the master of the Waltham Lodge 384 AF&AM during its 1963 centennial year. He also was active in ag extension, pork producers, and farm co-operatives.
Mr. Hagenbuch is survived by his son David (Cynthia) Hagenbuch, daughter Diane (David Williamson) Hagenbuch of Waynesville, N.C.; three grandchildren, Tyler (Jamie Citron) Hagenbuch of Chicago, Travis Hagenbuch of Portland, OR, and Tahnee (Nathan) Steinkamp of Albers, IL; two sisters-in-law, Shirley Duttlinger and Ruth Ann Strong; and numerous nieces and nephews.
In addition to his parents and wife, he was preceded in death by two brothers, Charles B. Hagenbuch and Glenn E. Hagenbuch; five brothers-in-law, Duane, Wesley and Warren Munson, Sidney Duttlinger and Robert Strong; and four sisters-in-law, Margery Jansen, Joan, Grace and Janet Munson.
Memorials may be directed to the Waltham Presbyterian Church, Mendota Area Senior Services, or to the donor’s choice.