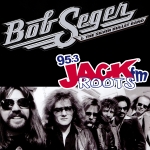 Gruff and tough.  Michigan born and bred.  Heartland rocker.  Common man.  They’re all ways to describe Bob Seger, who’s been around since 1961 with his first band The Decibels!  It wasn’t until 1969 when he chose to sign with Capitol (instead of Motown) and released his debut as ‘The Bob Seger System.’  Then it was another 6 years until he finally broke through with Live Bullet, and THEN his career (especially as a song writer) finally took off.

Our Roots song of the Day is actually inspired by Jane Fonda (listen to Roots for more on that subject), and was the most played song on radio in 1980:

Next week’s Roots: Tears for Fears!