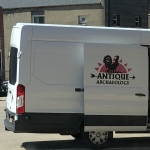 The former Herrcke Hardware store in LaSalle was picked over by the hosts of the History Channel’s American Pickers show on Saturday.

Mike Bird was working on renovating the Auditorium Ballroom near the corner of First and Wright streets when a coworker spotted American Pickers host Mike Wolfe outside.

Bird was invited in to watch some of the filming of the show where Wolfe and co-host Frank Fritz haggle with people over antique items that they restore and resell.

Bird could hear the action and says it’s just like what happens in the show on TV.

The former hardware store and building are owned by Bill and Judy Hubbard.

Bird says the Hubbards reached out to the Pickers to see if they would consider shooting an episode at the store.