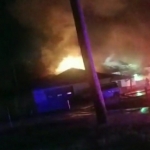 The Streator Fire Department says multiple people called to report flames and smoke coming from the roof of the building on E. Hickory Street.

Firefighters had the fire extinguished in about 25-minutes.

One firefighter reported a minor injury, but was able to return to duty.

The western portion of the building was heavily damaged, but the rest only sustained minor smoke damage.

The cause was determined to be accidental.