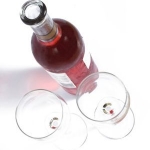 When the city of Ottawa tweaks its festivals, it may change the admission policy for the 2 Rivers Wine and Jazz Festival. Only people who buy wine are charged. Listening to the music is free. City Commissioner Wayne Eichelkraut says that might not be the best model.

The wine festival costs around $200,000 to put on, and the city has been in the red on it for the last four years. Mayor Dan Aussem says the city will keep putting it on, because he realizes how much extra business it brings in to the city. He thinks maybe the city should get more of the proceeds though.