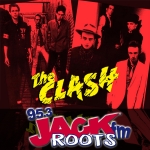 ‘The Only Band that Matters!’  At least that’s what the record company wanted you to believe.  Much like other music ‘scenes’ (both past and present) the British Punk Movement began when the Ramones traveled across the pond to do some shows in Europe.  In attendance that day were members of the Sex Pistols and the Clash.  Musicality didn’t matter, just your look, and the guys that went on to become the Clash has the look…well Mick Jones had the musical chops too.  But from where the band began musically, to the breadth and range the went on to achieve on London Calling and beyond can’t be understated.

Be sure to check out our BONUS CONTENT starting at 8:00 with another Roots example, plus the bloat that is Sandistas!, and if they hadn’t kicked Mick Jones out of the band, could they have eventually carried on and been successful?