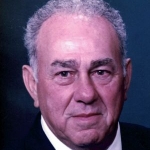 A remembrance ceremony will be held at the American Legion in Marseilles on Saturday, October 19, 2019 at 1:00 p.m. with Pastor Sherry Stevenson officiating. A celebration of life for friends and family will follow until 4:00 p.m. Private burial will be at Riverview Cemetery at a later date. Gladfelter-Roetker Funeral Home is assisting with arrangements.

Ronald was born February 17, 1934 in Marseilles a son of Alvin and Pearl (Edwards) Lowe. He married his loving wife, Donna Foster, in Ottawa on March 22, 1953. She preceded him in death on December 21, 2010. He is survived by his sons, Robert (Jill) Lowe and Daniel (Sandy) Lowe, all of Marseilles; grandsons, Jeff (Kris), Jason, Brian (Angie), and Brandon (Bethany); eight great-grandchildren and two great-great grandchildren; and a special friend, Beverly (Morrall) Ruffner. Ronald was preceded in death by a son, Michael; his parents; brothers, James, Clarence, Howard, Thomas, Alvin Jr., and Ted; and sisters, Velma, Rose and Iva.

Ronald worked for LOF from 1952 until his retirement in 1991. He enjoyed golfing, fishing, and camping. Ronald especially loved spending time with his family.

Memorial contributions may be made to The Multiple System Atrophy Coalition, or the American Cancer Society.