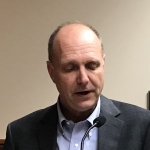 Rather than planning for a recreational cannabis sales tax in case cannabis sales are allowed in the city, an Ottawa man thinks the city should ban it altogether. Ottawa Plan Commission member Todd Volker spoke out against it to the City Council Tuesday night. He says kids will try it and it will wreck their lives.

Mayor Dan Aussem says the City Council and Plan Commission will have a workshop meeting together on Thursday, November 7 at 6pm at City Hall.

It’ll take until December for the Plan Commission to get a recommendation to the City Council. As a Commission member, Volker will be able to argue for limiting cannabis sales to certain zoning classes or for requiring a potentially harder-to-obtain special use permit. In the meantime, he plans to gather signatures on a petition against allowing recreational cannabis sales at all in the city.

Ottawa already has a medical marijuana business. The state appears likely to allow it to have a recreational sales business too.

Federal law actually still prohibits cannabis for recreational and medical purposes. But the federal government has had a policy of looking the other way in states where legislators have sought to make it legal.