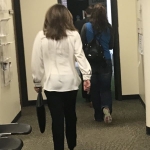 Hearings are beginning in the attempts by two former LaSalle County deputy auditors to get their jobs back. Auditor Jody Wilkinson filed a court case against the county. So did the American Federation of State, County, and Municipal Employees, which represents Tori Artman and Pamela Wright. Grundy County Judge Lance Peterson has those cases and on Thursday scheduled a December 23rd hearing into dismissing at least one.

The union also has a complaint with the Illinois Labor Relations Board. LaSalle County’s lawyers say the union can’t go to two places for a remedy.

Artman and Wright were fired after they were charged with stealing unearned overtime pay, however, a jury acquitted one and the county dropped charges against the other.