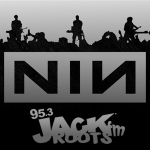 Trent Reznor was a one-time roadie for Ministry before holing himself up in his bedroom and studios to become a person who took Industrial Music even more to the mainstream with Nine Inch Nails.  If you went to High School in the 90s, it was almost a prerequisite to own a NIN T-shirt, usually in black (I rebelled and had one in white).  I haven’t kept up with their material as much over the last decade (and there’s been plenty of releases, instrumentals, EPs, songs, soundtracks, film and TV scores, heck he just won a CMA award since ‘Old Town Road’ samples a Nails song), but I think Robb and I did a pretty good job of capturing his roots.  And shame on me for not knowing the song that was the ROOT of ‘Closer’ (listen to the episode to find out).  BONUS CONTENT that wasn’t on the air this morning starts at 8:24 and includes Robb talking about the modern difference between EPs and LPs, plus should Nine Inch Nails go in the rock hall (they’re nominated this year) BEFORE some of his influences.

Next week:  no Roots — Thanksgiving