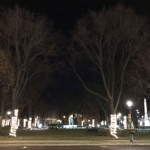 A work day is planned Thursday to make the holiday lights better in Ottawa’s Washington Park. That’s after a weekend of complaints about how few lights came on after the Festival of Lights parade Friday night. There are more lights along LaSalle St. south of the park. Mayor Dan Aussem says more will go up in the park.

Aussem is denying a story that’s going around about the city not wanting to spring the extra money to rent a bucket truck that can reach the branches in the park. He says he doesn’t know where that rumor came from, but he’s concerned about the ground in the park being too wet and soft to support a lift.

In any case, Aussem says the message has been received. He knows people aren’t happy with the lights and the city will do something about them this week. He says the city will form a committee to handle the Festival of Lights decorations next year.

Mayor Aussem says more about the Washington Park holiday lights in this interview: