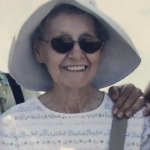 Funeral services will be held at 1 pm, Sunday, December 8 at Ottawa Funeral Home, with Pastor Dick Ewing officiating. Visitation will be from noon to 1 pm, prior to services, at the funeral home.

Dorothy was born December 20, 1928 in Chicago to Walter and Clara (Burkhardt) Jurczyk. She met her future husband and love of her life, Edwin Vesely at Carter Harrison High School in Chicago. She was an honors student, class secretary, and graduated in 1946. She furthered her education at Crane College in Chicago.

Dorothy and her husband Edwin were married in Visalia, California on July 12, 1948, where Edwin was playing professional baseball with the Visalia Cubs class D team. They honeymooned in Colorado and continued their future as newlyweds residing in Chicago. One of Dorothy’s fondest memories was meeting Clark Gable at a ranch in Colorado during their honeymoon.

Dorothy worked several clerical jobs while Edwin started his lifetime career at R.H. Donnelley. In 1954, Dorothy became a full-time homemaker after giving birth to her first son William. She gave birth to her second son James in 1956 and third son Peter in 1959. In the summer of 1959 they purchased their first home in North Riverside, IL. The couple continued raising the three boys in North Riverside until 1975 when they chose to continue westward and move to Hinsdale, IL.

In June of 1981 Dorothy’s sons graduated: William from Dental School, James from Medical School, and Peter from North Central College furthered by a law degree in 1984. After 38 years, Dorothy’s husband retired from R.H. Donnelley as Vice President. At this point they chose to travel extensively. They traveled through Europe, Australia, and Asia throughout their retirement.

Edwin and Dorothy bought their dream home in Sun City West, AZ in 1993. Dorothy lost Edwin in 2001 and continued to live in Arizona until 2016.

Dorothy was always a strong-willed individual and managed her medical care and business affairs with an old school iron hand born of growing up during the Great Depression.

In 2016 Dorothy had a hip replacement and chose to be closer to her family in Illinois. She moved into Hearthstone at PVL which became her new home.

Dorothy cherished all of the staff and caregivers at PVL so much she chose to spend her final moments resting at her home at Hearthstone.

Dorothy was preceded in death by her parents, Walter and Clara; older brother, Walter Jr.; and her husband, Edwin.
God bless all who have gently cared for Dorothy in her time of need. you know who you are and so did Dorothy.

Memorials may be directed to a charity of the donor’s choice in Dorothy’s name.