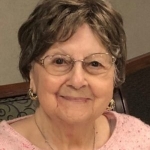 Mass of Christian Burial will be at 11 a.m. on Friday, December 6, 2019 at St. Columba Church in Ottawa, with Rev. David Kipfer, Pastor, officiating. Burial follow at Ladd Cemetery. Visitation will be one hour prior to the Mass, at the church. Arrangements have been entrusted to the Mueller Funeral Home in Ottawa.

She was preceded in death by her parents, her first and second husbands, Jay and Marvin, a daughter, Judith K. Gedraitis, and 4 brothers, Fred, Quinto, Joseph, and Domonic Credi.

Memorials may be directed to the family or the donor’s choice.