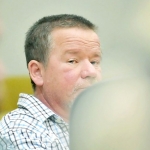 The defense team for 52-year-old Ken Cusick – who is accused of killing his wife Tracy – says that she could have died from a deadly combination of narcotics and alcohol.

Attorney Ryan Hamer noted Friday that death by irregular heartbeat, caused by drug use, wouldn’t show up in an autopsy.

Forensic Pathologist Scott Denton says it’s more likely that Tracy Cusick died by having her head forced in a toilet and drowning.

He cites water in her lungs and wounds on her neck and face. Namely a ring imprint on her forehead.

Denton also says that Tracy Cusick was mostly healthy and wouldn’t have been killed by the amount of methadone and alcohol found in her system.

Ken Cusick has denied having anything to do with Tracy’s death and even knelt during a taped police interview to show how he found her with her face in a toilet back in 2006 in their home.

Cusick told police at the time that his and Tracy’s marriage wasn’t the best and that he was unaware that she was taking methadone.

An injury expert and plumbing engineer testified on Thursday that the position in which Ken claimed to found Tracy isn’t possible for someone who is unconscious or dead.

(The photo used in this story is courtesy of Shaw Media and the LaSalle County court coverage media pool).