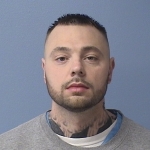 Grundy County’s sheriff’s department says a 34-year old inmate who walked out of the county jail building late Saturday afternoon is back in jail. Andrew J. Viles has been in jail since June 1 while charged with residential burglary. He’s also named in an Illinois Department of Corrections warrant for violating parole. He’d been in prison for burglary.

The sheriff’s department says Viles walked out of the jail building in Morris while accepting meal delivery. Putting his picture on social media generated lots of tips. Police found him Sunday near Stockdale Rd. and N. Saratoga Rd. in Morris.