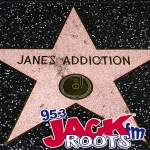 Nirvana, Pearl Jam, Green Day, Foo Fighters, Rage Against the Machine, Radiohead, the list could go on and on of artists who wouldn’t be what they are if Jane’s Addiction wasn’t around first.  Did they have a musical influence on all of them?  Maybe not.  But if it wasn’t for what Jane’s and Perry Ferrell did for Alternative Music in general (heck, he coined the term ‘Alternative Nation’) as well as finding a way to bring it to the masses with Lollapalooza, there’s a good chance none of those bands listed are heard or seen by the masses.  For that alone, they deserve to be the Rock Hall (they’ve only been nominated once…in 2016), but their music is pretty damn good too.

Even in edited form the above video screams ‘danger.’

Listen to Dave Grohl talk about Jane’s and Perry’s importance: