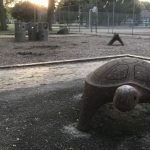 The city of Ottawa is getting the grant it asked for to make the improvements people say they want at Thornton Park. The state announced Friday a $305,100 amount going to Ottawa. The city will have to come up with at least that much to add to the funding. Based on input people gave a consultant last summer, the city plans to install pickle ball courts, a splash pad, and playground equipment.

The city of LaSalle asked for a grant to expand Rotary Park in the same grant program. It’s getting $400,000.

Some of our previous stories on this topic:
Splash pad, pickle ball courts, playground equipment in plans for Thornton Park