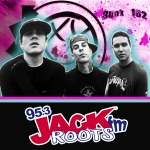 Some would argue (and it’s a pretty easy argument to make) that no band has had a bigger influence on the Pop/Punk sound of the 2000s and beyond like Blink-182.  Sure, there’s Green Day, and a ton of old school punk bands that kids are still influenced by, but the sound, style and content that Blink created gave thousands of teenagers reason to pick up a guitar or get a drum set and share their feelings to the max.  They may come across as a party/frat-boy band who runs around naked in videos telling d*ck and fart jokes, but when you scratch the surface, there’s a lot more going on there.  I guess I never realized how Emo they were and how big of an impact they had on that entire 2000s Emo scene.