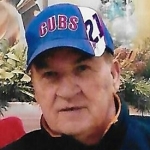 A celebration of life will be held from 4 to 7 p.m. on Thursday, January 30, 2020 at the Mueller Funeral Home in Ottawa. Military rites will be accorded by the American Legion Post 33 Veteran’s Group Honor Guard.

Frank was born on July 28, 1941, in Ottawa, to Frank Donald and Clarabelle (Brothers) Knox. He was a veteran of the US Navy. Frank married Cathy Smith on July 27, 1973 in Ottawa. He was a former member of the Ottawa Lion’s Club.

He was preceded in death by his parents, a brother Butch Frig, and a sister Carol Wheeler.