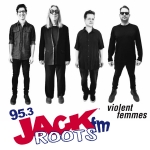 The Violent Femmes are interesting band for Roots because they’re kind of on an island all to themselves.  Sure there’s Dylan influence and The Talking Heads, and other artists who have done similar things, but the Femmes just do it a bit differently, and it works.  Although after playing this week’s Roots song on the air, Kevin from Streator, a Shap in the Morning regular said ‘I don’t know.  I didn’t like that song!’  Apparently, they’re an acquired taste.

Our Roots song of the Day:  (bonus points for the bassist’s amazing mullet — swearing in song)

Watch a drummer play the GRILL on the devilish ‘Country Death Song’ :