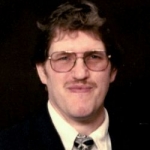 Funeral services will be held 6:00 p.m. Tuesday, February 4th at Gladfelter-Roetker Funeral Home with Reverend Duane Kaufman officiating. Visitation will be from 4:00 to 6:00 p.m. Tuesday. Cremation rites will be accorded following the services.

Daryl was born July 13, 1958 in Ottawa, Illinois, a son of Wayne and Margaret “Peg” (Eich) VeZain. He married Debbie Compton June 13, 1998 in Marseilles. Daryl is survived by his wife, Debbie of Ottawa; brothers, Joe (Karen) VeZain of Ottawa, Geoff (Kari) VeZain of Marseilles; a sister, Peggy Cummins of Sandwich; and a brother-in-law, Bob Compton of Chico, TX. He was preceded in death by his parents.

Daryl had been employed at the Community Hospital of Ottawa. He was an avid sports fan, particularly the Chicago White Sox. Daryl enjoyed computer games, but the time he treasured most was that spent with his family.

Memorial contributions may be directed to the Wounded Warriors or the American Diabetes Association. To share a memory, please visit www.gladfelter-roetker.com or Gladfelter-Roetker Funeral Home on Facebook.