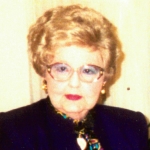 Evelyn Brue Roeder, age 101, has died of a long standing heart condition at Ottawa Pavilion. Funeral Services will be Thursday, February 6th at 11 a.m. at Bethel Lutheran Church with Pastor Randy Mortenson officiating. Burial will be in Oakwood Memorial Park. Visitation will be from 4-8 p.m. on Wednesday, February 5th at Gladfelter-Roetker Funeral Home.

Evelyn Brue Roeder was born to Peder and Emma (Olson) Brue of rural Ottawa in 1918. She was the second child in a family of seven children.

Evelyn was born to teach music and was a well known teacher of fretted instruments since 1940 in Ottawa, Illinois. Her specialty was all types of guitar and other fretted instruments. She developed many hundreds of students of all ages and walks of life taking them to the most advanced levels of ability and winning the highest awards in state, national, and international music contests in areas far from Ottawa like New York, Cleveland, Cincinnati, Columbus, Detroit, Louisville, Chicago, Rockford, Springfield and more. She also was hired as a guitar judge held in convention centers and universities for artist and Olympic categories of competitions.

At an early age Evelyn showed the signs of musical ability. As a child, she learned to play piano, violin, accordion, guitar, and steel guitar. After her Serena High School years she graduated with a teachers degree from the Honolulu Conservatory of Music in Cleveland, Ohio, and opened her guitar school at 121 ½ West. Main Street in Ottawa in 1940. She continued to study music at DePaul University in Chicago and throughout the first years traveling weekly to Chicago to study with private teachers.

Evelyn’s school stayed at the same location for 43 exciting years. The school on the second floor was once occupied by Browns Business College. Evelyn started with two rooms and kept adding space ending up with six rooms and ample space to develop the large musical revue’s she produced and presented each year at the Ottawa Township High School auditorium featuring hundreds of students. Evelyn had a special ability to find the talent a person had within and bring it out to develop each ones ability. Evelyn has used the lower level of her Ottawa home as the present Evelyn Brue Guitar School and Store.

Preceding her in death are her first husband, Roy Michelson, who helped Evelyn establish her school of music. He died in 1967. She married guitarist George Roeder in 1969, who also became a joint teacher and partner in the music school. He died in 2015. Also preceding her in death were her parents, Peder and Emma Brue; her only loving sister, Charlotte Henrikson, four brothers, Palmer, Bernard, Reuben L. and Francis Brue; one niece, Betty Todd of Ottawa, and one nephew, Larry Henrickson of DeKalb, IL. She is survived by one loving brother, Howard (Betty) Brue of Ottawa, many nieces and nephews; her only daughter, Mrs Ludwig (Tobe) Saskor of Pinehurst, North Carolina; two granddaughters, Giselle Saskor Clavette of Harwinton, Connecticut and Kristina Saskor of Seattle, WA, and one grandson Michael (Brynne) Saskor of Seattle, WA; three great-grandchildren, Colin and Amber Clavette of Harwinton, Connecticut and Stone Saskor of Seattle, WA.

Of special joy to Evelyn were the many family members who became her students and excelled musically on her performance stages throughout the years. Many of her students progressed into the professional realms of music as teachers, entertainers, TV, radio etc. Evelyn has received many honors in magazines, publications, state and national , listing her as the who’s who in her profession and most recently, the prestigious Omni Arts Award in 2017.

Through the years Evelyn and George performed in various entertainment realms with vocals and instrumentals, also were masters of ceremonies at awards presentations in Chicago and beyond. Evelyn also appeared many times playing Pedal Steel at International Steel Guitar Conventions.

Memorial contributions may be directed to Bethel Lutheran Church or Zion Lutheran Church in Ottawa. To share a memory or sign the guestbook, please visit www.gladfelter-roetker or Gladfelter-Roetker Funeral Home on Facebook.