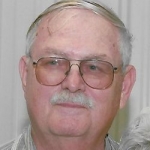 Weldon “Oggie” Oetken, 82, of rural Marseilles, passed away on Wednesday morning, February 5, 2020 at his home.

Funeral services will be held at 11 a.m. on Monday, February 10, 2020 at the Mueller Funeral Home in Ottawa, with Rev. Duane Kaufman, officiating. Burial will follow at Oakwood Memorial Park, where full military rites will be accorded, by the Marseilles American Legion Post 235. Visitation will be from 2 to 5 p.m. on Sunday, at the funeral home.

Oggie was born on October 29, 1937 in Los Banos, CA to Malcom and Velma (Powers) Oetken. He married Shirley Ainsley on June 22, 1958 in Ottawa at the Christ Episcopal Church. Oggie served in the National Guard during high school and after graduation served for 4 years in the US Air Force, and he owned and operated his own business, Airway Communication. He was a member of the Starved Rock Amateur Radio Club, LaSalle County Farm Bureau, the Marseilles American Legion Post 235, and was retired from the Civil Air Patrol.

He is survived by his wife, Shirley, a brother Randy (Christie) Oetken, of Coeur d’Alene, ID, a sister Wanda Danovich, of Arizona, and several nieces and nephews.

He was preceded in death by his parents, and 3 children, Weldon, Jr, Denise, and Pamela.

Memorials may be directed to OSF Hospice.