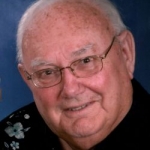 Fred attended St. Francis Grade School and graduated from Marquette High School. He was a member of St. Francis Church. Fred loved to travel with Marlene and was a die-hard Chicago Cub fan! He had been quite active along with Marlene in the Ottawa Baseball Pony League. Above all, his family was of utmost importance. His most treasured time was that spent with his children and grandchildren.

Funeral services will be held 10:00 a.m. Tuesday at Gladfelter-Roetker Funeral Home with Reverend David M. Kipfer officiating. Interment will follow in Calvary Cemetery. Visitation will be from 4 to 7 p.m. Monday, February 10th at the funeral home. Pallbearers will be Matt Kennedy, John and Blake Thompson, Daryl Deckard, Gregg Olson and Tim Vidmar. Honorary pallbearers will be Amanda Kennedy, Shelbi Vidmar and Whitney Thompson.

Memorial contributions may be directed to a charity of the donor’s choice. To share a memory, please visit www.gladfelter-roetker.com or Gladfelter-Roetker Funeral Home on Facebook.