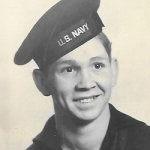 Willis Allen, 95, of Ottawa, passed away on Friday night, February 7, 2020 at the Ottawa Pavilion.

Funeral services will be held at 11 a.m. on Wednesday, February 12, 2020 at the Mueller Funeral Home in Ottawa, with Rev. Duane Kaufman officiating. Burial will follow at Oakwood Memorial Park, where full military rites will be accorded by the American Legion Post 33 Veteran’s Group Honor Guard. Visitation will be from 9 to 11 a.m. on Wednesday, at the funeral home.

Willis was born on December 8, 1924 in Streator, to Claude and Oma (Wolff) Allen. He married Lou Ann Brown on January 14, 1951 at Epworth United Methodist Church. Willis was a veteran of the US Navy and served in WWII and Korea in the South Pacific. He worked at Bakelite, until his retirement. Willis was a member of the American Legion Post 33 and the Ottawa VFW.

Willis is survived by a son, Lawrence Allen, of Ottawa and a sister Jean (Thomas) Kimes, of Streator.