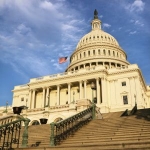 Channahon Republican Cong. Adam Kinzinger is listed as not voting on the resolution to eliminate the Equal Rights Amendment’s ratification deadline yesterday. So is Darin LaHood, who represents the Peoria area. Republican Cong. Rodney Davis of central Illinois voted for the change. Most of the party’s members across the country voted against it while Democrats were for it.

In all, ten Republicans and Democrats didn’t vote on the deadline removal. Democratic Congressional candidate Dani Brzozowski says not showing up shows where Kinzinger’s priorities are. She says, “He fails to show up for women in his district, and he fails to show up on our behalf in Washington.” We have not received a reply to our request for comment from Kinzinger’s office.

The 1982 deadline said that enough states had to ratify it before a certain date for the amendment to become part of the Constitution. But some states have ratified it since and now some people are expecting legal challenges if the deadline is removed. That resolution hasn’t gone to the Senate yet. Supreme Court Justice Ruth Bader Ginzburg said this week, ERA advocates should start over without a deadline.