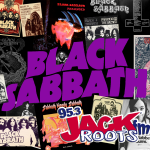 There’s an argument to be made (and in this episode, I in fact do) that Black Sabbath is right up there with the Beatles and Elvis for the biggest influence and impact on music in their wake.  Are there others that could be mentioned?  Absolutely.  But there’s no denying that Black Sabbath started Metal.  There were elements of it here and there, but no one put it together in the package that Sabbath did.

And here’s the clip of Ozzy’s original vocals (really coming up with a melody than anything) from ‘Paranoid.’  It’s from the Classic Album documentary which you can watch on Amazon Prime

Legendary California Jam!  That rainbow, and that outfit Ozzy has on!

Next episode:  The Cranberries