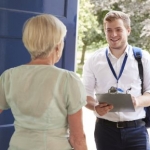 If 2020 had stayed on a normal course, third party candidates and their volunteers would have started knocking on doors across Illinois Tuesday to gather signatures. They need 25,000 to get on the presidential ballot and they have to collect them in a 90-day window.

Bennett Morris, who chairs the Libertarian Party of Illinois, says that’s not easy in a normal year and it’s even harder now with a stay-at-home order in place to fight the corona virus.

Morris is asking for some kind of relief from the requirement this year. He says he hasn’t heard from the governor yet. Some lawmakers are sympathetic; some are not. He says some aren’t sure what they’re allowed to ask for in the legislature with everything going on right now. The Illinois Green Party said Tuesday it hadn’t received responses to similar requests.

Morris says the democratic process is in jeopardy without a change. He says since the Libertarian Party of Illinois was formed 45 years ago, it has had candidates on the presidential ballot in Illinois. He hopes that’s enough to persuade the Democrats and Republicans who write the rules that it’s normal and good to let Libertarians on again.

Similarly, the Illinois Green Party says it has put presidential candidates on the ballot every four years since 2008. Co-chair Rich Whitney says the party’s not willing to send its volunteers around and risk picking up and spreading the virus.

Morris is asking anyone of any political persuasion to ask the governor and legislature to change the state’s election code to allow for easier ballot access for third parties in these unusual times. Morris says someone could rightly claim the election is illegitimate. In a race where a candidate loses in a close call, some people could claim the outcome would have been different with more choices on the ballot.

The Green Party is also asking for waivers from the usual requirements. Whitney says in a statement issued Tuesday, “We strongly support emergency public-health measures. Defeating the pandemic is priority number one. But these measures also make the petitioning requirements of the Election Code even more patently unfair than they already were.” Whitney says the law allows no substitute for supporters signing a hard copy of a ballot access petition.