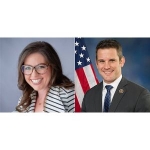 Brzozowski thinks the Affordable Care Act’s insurance marketplace should be opened to everyone – even if they haven’t had a life-changing event or lost insurance through an employer.

Incumbent Republican Adam Kinzinger says Pres. Trump acted correctly by imposing travel bans, but says the federal government’s lack of tests and personal protective equipment is a shortfall that needs to be addressed. On health insurance, Kinzinger says he’s committed to doing what is best for the people he serves.

Brzozowski also says incumbent Republican Adam Kinzinger’s votes to eliminate the Prevention and Public Health Fund were votes against funding to fight pandemics. Kinzinger spokeswoman Maura Gillespie says the fund wasn’t being used for anything at the time and that Congress was trying to work on the national debt and deficit. She also says there’s no language in the act that formed the fund that designates it for pandemic response. Gillespie says that Kinzinger has voted to reauthorize the actual fund that is used to fight pandemics.