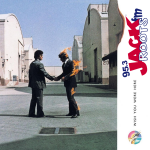 First off, I’ll start by saying shame on me for waiting 2+ years into the show before tackling Pink Floyd.  Now that that’s out of the way, I chose Wish You Were Here because it’s my favorite album of theirs.  Was it always my favorite Floyd record, probably not.  But your tastes change as you age.  It could simply be because Shine on You Crazy Diamond is one of the greatest songs ever recorded.  It could be because its not Dark Side or The Wall, the two albums that usually get brought up when talking about Floyd.  Or it could be that the band stays in the same key and chord signature the entire album (thanks Josh)!  And then…there’s the story behind it, and what a story it is.  Enjoy.

Here’s a few great covers of this song by Primus and the Foo Fighters with Brian May.

Here’s an excellent documentary about the making of the album that we played a clip from at the end of this week’s episode.  I didn’t realize they actually lit a stuntman ON FIRE for the iconic album cover photo!  Tons of other great stories in there.  I love the two backup singers who did harmonies on ‘Shine On You Crazy Diamond’ talking about the band.

Animation that played along with Part 1-5 of Shine On….

Honorable mentions:  Interstellar Overdrive, One of These Days, Fearless, Time, Have a Cigar, Wish You Were Here, Mother, Is There Anybody Out There?, Comfortably Numb, Run Like Hell, In the Flesh, Sorrow, High Hopes