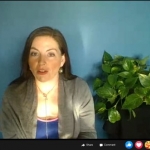 Brzozowski says she can’t go along with the regional reopenings a lot of Republicans are calling for. During a virtual town hall on Facebook Tuesday night, Brzozowski talked about her support for monthly stimulus payments to people facing financial struggles.

The first thing Brzozowski would like to work on if she’s elected to Congress is campaign finance reform. She says the people who make the laws aren’t as inclined to represent ordinary people when the wealthiest campaign supporters have so much more money to give.

She says her second priority is making health care affordable. Brzozowski says controlling prescription drug prices is a bipartisan issue with a lot of support and shouldn’t be hard.

Other topics: Brzozowski says she’s concerned about Kinzinger being too hawkish to be involved in foreign policy, such as recently being named to a China Task Force; she says her idea of gun control doesn’t mean taking away shotguns from ordinary people who aren’t committing crimes; she would like to double Pell grants to help students pay for college, but she’d also like to have tuition free college.

And Brzozowski teased an upcoming campaign announcement during the forum. She says a big endorsement is coming that will raise her campaign’s visibility. She also says generic polls show Democrats doing better than Republicans in Congressional races.

Brzozowski is challenging incumbent Republican Adam Kinzinger, who has been in Congress since 2011.